Skip to content
Previous Next
Who’s the boss in underwriting?

Most Popular Income Type in the US

In the world of underwriting the self-employed borrower gets a ton of attention.  If you ask for underwriting training, in most cases the majority of the time will be spent going over tax returns, 1088 forms, distributions, and cash flow analysis.  The complexity of the income calculations can get people very worked up in trying to understand how much this person actually makes.  I get it, it can be complex.  But in actuality the self-employed borrower is not the boss, far from it.  The lowly 1040 individual is the big dog on the block. That’s right.  There are roughly four times more 1040 filed than all of the self-employed tax returns combined.  If you compare that to the population of the United States that equates to the COMBINED population of all the states shown in the graphic above.  That accounts for about 156 million of the 253 million total tax returns.

Did you know that 53 million tax returns are filed jointly?  This works out to about 20% of all tax returns.  The joint tax return can be a real pain point for the underwriter.  Especially when you have a married borrower who has passive income.  Examples include dividend, interest, note income, and social security just to name a few. The trouble with the 1040 and the joint tax you can’t get income if you are looking at the tax return alone.  Some loan officers just submit tax returns and ask you to “pull “additional income from the 1040 form with no additional information.  These types of borrower income always need a supporting documentation and with 20% of the population (53 Million Tax Returns) this can cause big slowdowns in the review process.  This can be a real issue if you are using tax transcripts or OCR on the tax returns.  These solutions don’t work in these situations.

Corporations are on the the decline

The traditional corporation is on the decline and has been since the 1980s.  Forbes shows the decline of C-coprs on a steady decline, but why? 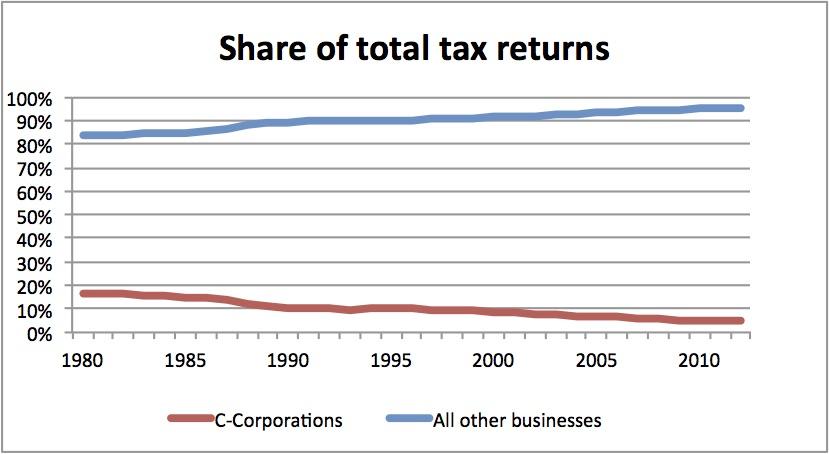 The reasons for this has a number of speculative causes varying from the corporate tax rate, statutory and effective rates.  But from the underwriting perspective, expect to see fewer and fewer of these returns going forward.  Thus C-corps does not get the title of King.

Who is on the rise? Where is all the money going?

What does this mean for underwriters?

Expect to see an increase of 1065 (Partnerships) and Schedule C (sole proprietor) tax returns in the years to come.  These forms combined with the omnipresent 1040 will be the dominant forces going forward.  Knowing about rare tax form is helpful, but being able to master the majority of the income situations coming your way is much more useful. Get the basics down on these three tax returns to master the majority of the income scenarios.  This will have big gains in quality and speed for your upcoming employee reviews as an underwriter.

About the Author: David Stamm

David is the lead software developer for UberWriter. He shares his 20 years of experience in operations and process in his blogs. His unique perspective from developing high security and safety critical software is applicable and relevant to the loan origination process.

Want to talk to an underwriting expert about how Blueprint can transform your workflow?